It’s been twenty years or so since self-publishing first became a viable thing. Two decades of growth in the indie fiction field have made it increasingly clear which writing styles and marketing tactics tend to be most lucrative. The “secret” to writing bestsellers is to define your genre and audience and satisfy them for all you’re worth. If you can manage to grind out several books in a series, you have the best chance of creating a steady revenue stream. That means developing a theme or formula that can sustain more than one book, exercising as much creativity as you can within those boundaries, and repeating the basics as long as your readers keep snapping it up. Writers who can do this also seem able to turn out books at supersonic speed.

Employing this “secret” isn’t as easy as it sounds. Personally, I don’t seem to have the skill that it requires, but that doesn’t make me bitter. On the contrary, I rejoice for those who can do this, since it makes all of self-publishing more legitimate. I remember all too well the days when gatekeepers stood in the way of aspiring authors, letting in a privileged few and making a point of mocking the rest of us and worse, wasting our time. I used to read or listen to advice given by “professionals” in the field who pretended to “encourage” those of us on the outside. Their real purpose was to keep us prostrating ourselves before the gates, so that they could pretend to stand in some beatified light from above that had blessed their own efforts. Now we can tell them what to do with their “advice.” It’s been exposed, if not as fraudulent, then at least as archaic.

Some of us have problems with genre. I’m not particularly a fan of romance, science fiction, mystery, or dystopian themes (although I’m most tempted to try my hand at the last one, in light of the disastrous presidential election of 2016 and its increasingly scary aftermath). I define my stuff as chicklit, generally speaking. Does it follow that just because I don’t write to suit a more exact genre, that few readers will get my stuff? I can’t be the only person in the world who likes to read long, complex, character-driven, woman-dominated stories, and tends to write in the same vein. Stories like this take a while to read and absorb, and accordingly take forever to write. One of the reasons this process is so arduous is that I go where my characters take me, not necessarily where the market dictates they should go. My stories usually feature a relatively weak heroine who is trying to get stronger. All I can say for her is that she’s not quite as big an idiot at the end of the story as she was at the beginning. Her life isn’t totally straightened out, although it’s getting there. Can a story like that represent a category in itself? Maybe we could call it the Incompetent Chick Genre.

If I depended on confused and indecisive heroines to move plots along, they’d spin their wheels for 300 pages. So I surround them with stronger characters, often female, who aren’t afraid to yell at them to get off their asses, and then show them how it’s done. In Secretarial Wars (2003), an ambitious but easily frustrated secretary, Miriam, needs such a push. She works for a Federally funded grants program that she suspects is subject to corruption, but doesn’t know how to prove it. She encounters Pamela Whittle, a college professor who has been rejected for one of these grants, and has determined not only to figure out why, but to reverse the decision. Whittle carries on with this plan until she becomes part of the corruption, at least in Miriam’s opinion. 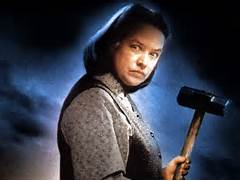 When my critique group read Secretarial Wars, they took to Whittle much more than they did to Miriam. Like most writers, my colleagues enjoy playing the game of choosing which famous actors should ideally play the lead roles in any prospective movies based on their stories. The role of Whittle, according to the group, would be perfect for Kathy Bates, who is well known for her portrayal of dynamic, sometimes crazy women. In fact, it seems that every strong female role I come up with is a perfect fit for Kathy Bates. How about a new trend based on this phenomenon? We could call it the Strong Female Rescuer Genre.

In Let’s Play Ball (2010), I imagined a close but uneasy relationship between fraternal twin sisters who have taken radically different paths in life. Miranda is a government bureaucrat with a lawyer husband and a house in the suburbs, while Jessica is a sportswriter who sacrifices normal career prospects, relationships, and financial security for many years in order to establish a magazine. Jessica’s publication finally catches on, and her personal life seems equally settled when she becomes engaged to a Major League ballplayer. Her less conventional path seems to end up making her both happier and more successful than her twin. Then the balance of power is knocked off kilter again when Jessica’s fiancé is kidnapped, and circumstances plunge both sisters into the investigation … with Jessica harboring suspicions against Miranda even as she requires her twin’s help.

My two music-inspired novels, The Rock Star’s Homecoming (2007) and Handmaidens of Rock (2014), both unfold partially on college campuses. I made use of my own experiences as an academically conscientious but socially awkward coed in the early 1970s. In those days, the friends I made tended to be stronger personalities than I was. More often than not, I let them set the tone of the relationship. The heroine of “Homecoming,” Imogene, feels herself getting crushed between two powerhouse roommates. One is a hopeless snob, and the other is the sister of a rock star whom Imogene worships from afar, and eventually gets to meet. In “Handmaidens,” aspiring journalist Candy struggles with a bad freshman roommate, who hypocritically criticizes her timidity with the girls in the hall while systematically badmouthing her behind her back. Although that situation mirrors my own unhappy freshman experience, I did not leave my small-town school, as Candy did, for the more congenial and diverse surroundings of a big university. I stuck it out, and eventually found my niches.

All in all, the “incompetent chick” in my stories resembles me, while the “strong female rescuer” is the more dynamic friend who swoops in and takes over. If I were casting a movie based on this dynamic, any number of ingénues could play the innocent girl.  But I couldn’t do without Kathy Bates, or a Kathy Bates type, to move in and threaten to blow her off the screen.