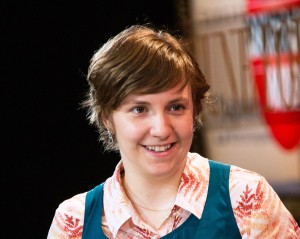 I’ve been reading some nasty screeds lately about Lena Dunham’s hit HBO series “Girls.” The show follows the New York-based adventures of four twenty-something girls who somehow lack the fabulousness of their predecessors, the Sex And The City women. Dunham’s character, Hannah Horvath, a struggling writer and the least glamorous of the girls, is naturally the one I identify with. Her evident inspiration, Carrie Bradshaw of SATC, was a popular columnist, and thus not nearly as relatable. You would think followers of “Girls” who are struggling writers themselves would be just the type to identify with Hannah, yet viewers love to hate her. Her narcissism, immaturity, and poor life choices may resonate, but that doesn’t make her likeable.

Of course, it’s Lena we resent, not Hannah. Like many of us, Dunham writes semi-autobiographical stories. Those of us who dabble in chicklit often feature heroines who screw up a lot; in fact, if they didn’t, there would be no story. Writing instructors tell us it’s essential that our characters grow up and figure things out in the course of a story. Since Dunham’s series is presumably set to run for a few more seasons, Hannah’s growth process is agonizingly slow. She still hits up her folks for money. She’s had numerous near-breakthroughs in her writing career, but something always goes wrong. Her relationships seem promising for a few episodes, but something is always off kilter.

Lena Dunham’s success proves that you can make a living by making hay out of your mistakes. But how did such a screw-up land an HBO series? Not by doing the things her alter ego does, but by working hard, taking risks, getting a little bit lucky, and cultivating helpful connections rather than alienating them.

Lena’s success might give us all hope, except that Hannah’s struggles seem more believable. During the current season she landed a respectably salaried but unfulfilling job shilling for a corporation. She can’t resist telling her boss that there’s no way she’ll be doing this job in ten years, because that would mean she never became a real writer. That day she comes home from the office not quite sure whether she quit the job or not. Either way, she vows that from now on her free time will be devoted to becoming the writer she was intended to be. She tells her actor boyfriend not to talk to her for three hours, as that’s the amount of time she will be allotting each evening to her own creative pursuits. When she’s done, she’ll be ready to listen to him describe his own day. While she’s telling him this, she falls asleep on the sofa and he tucks her in. So much for pursuing fame and fortune in your spare time.